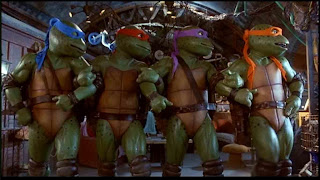 The Teenage Mutant Ninja Turtles are a team, I realise: all four of them. Leonardo, Michelangelo (Michaelangelo once upon a time...), Donatello and Raphael. For many of us, there are rules about them. For one thing, the order in which I listed them is not coincidental; it corresponds with their cabinet number on the old arcade games. Is it true in today's console games? I dare not check. I only pray it is the same. If not, then I also assume that cats chase dogs through the streets, and the number one single is not the newest track from M People. P-shaw!

In pecking order, we realise that Leonardo is of course the leader. Should he be missing (or should Raph go batshit crazy), Raphael is second in command. Due to his intelligence, Donatello would next be thrust into the role of commander, and Michelangelo is perfectly content to always follow his brothers' command. The subordinance of the latter two was fantastically illustrated in the first movie; as the dutiful Leonardo and brash Raphael butt heads, Donny and Mikey focus on more important things.

And as an aside (to an entry that's admittedly an aside), why did the Turtles wear face masks in the first place? Some may say that their colours help differentiate the turtles, who were otherwise identical in most mediums. To this I cry foul: in the original iterations all four turtles wore red, for one thing, and furthermore, if we're operating on the basis of reality, all of the Turtles know who is who, so the face masks are more of a matter of vanity than anything else. I mean, honestly; the masks aren't particularly concealing their identity: once you see an enormous bipedal Turtle brandishing Japanese weapons and 80s wit, you've pretty much narrowed it down.

Anyhow, my observation (as diluted as it has become) is based originally on my belief that the natural pairing of the Ninja Turtles becomes Leonardo and Raphael, and Michelangelo and Donatello. Your prime example is in the previous video; because of Raphael's volatile personality and Leonardo's perceived sense of responsibility, the interaction between the two is frequent and often volatile.

Because of their passive nature, Mike and Don seem a natural duo, and neither particularly challenges for any leadership role (aside from one episode in the 2003 series titled 'Same As It Never Was' where Donatello travels to an alternate dimension where his absence causes the dissension of the Turtles, who have drifted apart, etc. etc. [fantastic episode, watch it when you can]).

There is little diversion from this teaming, other than one episode in the 80s series where a training session pitted an invention-wielding Donatello and Leonardo against Raphael and a disinterested Michelangelo. Should you be trying to team them up, this would seem the second-most natural choice, with the outgoing nature of the latter two (charismatic in the sense of the sarcastic 80s Raph, outspoken in any other iteration) compared to the quiet, virtuous nature of the Leo/Don pairing.

The other, most curious combination sees Leo and Mike, and Don and Raph. To me, this is chalk and cheese; these brothers seem to have very little one-on-one correspondence, having neither similar personality traits or significant airtime. Pairing Don with Raph in particular seems bizarre as fuck to me - it's like combining Z-era Krillin with Yamcha. Sure, they're on the same team, but there's a noticeable disconnect between the two that renders them fairly at odds with one another.

I welcome any opinion on this matter, but I also understand that this conversational piece is obscure at best, dated and fucking irrelevant at worst. I would try to assure you that there are other, toy-related entries fast upcoming, but I'm drunk right now and I dare not make any promises I may not remember by tomorrow morning...

Posted by Tony Cocking at 1:31 AM No comments: 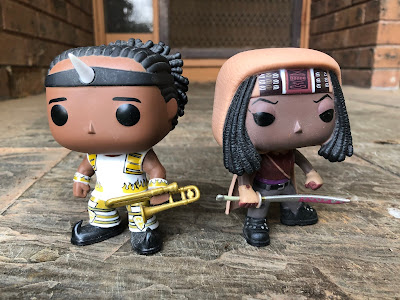